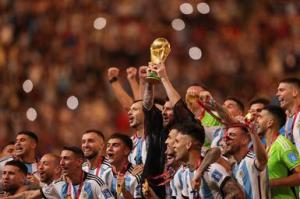 Argentina and Messi spot on for World Cup glory

Lionel Messi has longed his whole career to win the FIFA World Cup™. On an extraordinary night in Lusail Stadium, when Messi and Kylian Mbappe lived up to their heavyweight billing, the Argentina genius must have felt he won it three times.

Mbappe became only the second man after England's Sir Geoff Hurst to score a World Cup final hat-trick, but it is Messi who takes the spoils, if not the adidas Golden Boot, won by eight-goal Mbappe. Not that Messi will mind his Paris Saint-Germain team-mate winning that race. Messi opened the scoring and looked destined for a straightforward triumph until France recovered from 2-0 down to send the game to extra-time. Messi struck to restore Argentina's lead but Mbappe equalised for a second time. Messi and Mbappe both scored at the beginning of the shootout, but Emiliano Martinez saved from Kingsley Coman and Aurelien Tchouameni fired wide, leaving unheralded Gonzalo Montiel to convert the winning kick. Argentina hadn’t scored in their two previous final appearances – in 1990 and 2014 – but the South Americans had two goals before half-time and could legitimately have argued they deserved more.

Messi broke the deadlock. Of course, he did. Angel Di Maria did the legwork, deceiving Ousmane Dembele to skip into the box before a nudge in the back from the Frenchman sent Di Maria tumbling. Messi nonchalantly rolled his penalty right and Hugo Lloris dived in the opposite direction.

Lionel Scaloni’s irresistible team were swarming all over the 2018 champions. And when France were hurried out of possession high on their left, Argentina briskly swept upfield. Julian Alvarez eventually released Alexis Mac Allister, who guided a perfect ball along the floor to the back post, where Di Maria arrived unaccompanied to defeat Lloris with a controlled strike.

Didier Deschamps, seeking to inject zip and intent, withdrew Dembele and Olivier Giroud in favour of Randal Kolo Muani and Marcus Thuram on 41 minutes. Argentina remained in the ascendancy, nonetheless, and Lloris was repeatedly worked after the break. But the remarkable Mbappe, hitherto barely involved, delivered a staggering 97-second one-two to haul France level. Kolo Muani dashed behind the Argentina backline, initiating panic in Nicolas Otamendi, who illegally impeded the attacker’s progress in the area. Martinez leapt the right way but couldn’t keep out Mbappe’s crunching strike.

The game had barely restarted when Coman relieved Messi of possession to instigate another raid. Mbappe cushioned Adrien Rabiot's aerial ball back for Thuram, then darted forwards to meet the flighted return with a volley that flew past Martinez. France pinned back visibly rattled Argentina but couldn’t claim the winner, while Lloris tipped over a rising drive from Messi at the death. Argentina regained their composure in time for the extra half hour. Dayot Upamecano bravely blocked a goalbound strike from Lautaro Martinez, who was narrowly wide with another effort.

It needed Lloris’s outstanding reflexes to repel Martinez early in the second half of extra-time. But there was no denying Messi on the follow up, not even Upamecano desperately trying to clear from the line.

Still, France refused to yield. Montiel used an arm to block an Mbappe effort and the nerveless 23-year-old sent his penalty unerringly into the left corner. Both teams could have won it at the very end. Martinez did exceptionally well to save one-on-one from Kolo Muani, then an unmarked Lautaro Martinez headed wide from in front of goal.

To paraphrase former England manager Sir Alf Ramsey, Argentina had won it twice and had to win it all over again. They did just that to claim a third World Cup and first since 1986. And to give Messi the prize he so wanted to add to a glittering personal treasure trove.

In a game bubbling over with meaningful incidents, it was Golden Glove winner Emiliano Martinez who gave Argentina the advantage they wouldn't surrender.

Martinez made his debut only 18 months ago and rocketed to prominence in his homeland with decisive penalty shootout heroics in last year's Copa America semi-final victory over Colombia. He was outstanding in the quarter-final shootout in Qatar, saving twice when Argentina defeated the Netherlands after a two-goal lead was eaten up late in the match. The South Americans similarly had advantages wrested away in this astonishing final. But there would have been some comfort in the sight of the imposing Martinez between the posts for the penalties. He was close to Mbappe's penalty in normal time and had his eye in by the time Coman stepped forward. Martinez, who superbly denied Kolo Muani a winner at the end of extra-time, flew to his right to parry Coman's kick.

Argentina were in front, once more, and following subsequent successful kicks from Paulo Dybala, Leandro Paredes and Montiel, the advantage obtained by Martinez was crucial. Lionel Scaloni, Argentina coach: "I'm proud. Today I am liberated. This team gives me so much pride, it is all down to them."

Emiliano Martinez: "We had the game under control but the team were doomed to suffer. France almost scored a winner, too, but thank God we are here. The World Cup is something I have been dreaming of. I have no words to express what I'm feeling."

Rodrigo De Paul: "We were born to suffer, we are going to suffer all our lives, but I will never forget this. I think we are fair winners. To be champions, you had to beat the last champion, and we did. This is a joy I can't explain."

Hugo Lloris: "We were too reactive. It was almost a boxing match, we surrendered blow for blow. The only regret we can have is that we may have missed our first half. Despite that, we didn't give up, we believed until the end.

"It's always cruel to be on the wrong side. But we will have given everything from beginning to end in this competition. We come out empty, it's been almost a month of competition."

Player of the match