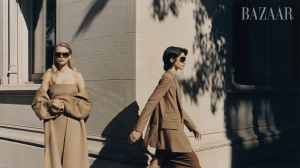 admin
In a world of mixed messages, the Italian brand Max Mara is uniquely synonymous with power. As Angelina Jolie evolved her image to include humanitarian work as well as her acting, she made Max Mara’s pencil skirts and wrap coats staples of her wardrobe. When Meghan Markle’s celebrity shifted from soundstage to world stage, she relied on an assortment of unfussy button-up silk blouses and mouthwateringly soft outerwear. And when Nancy Pelosi, soon to be the Speaker of the House, exited a contentious meeting at the White House with then-president Donald Trump in 2018, she was cocooned in a sleek red funnel-neck coat that gained viral acclaim as the “fire coat.”

These are clothes designed to empower and also recede behind the wearer in their crisp correctness, to ensure her image won’t be cluttered by any competing message from a fashion designer.

And this is the kind of clothing Max Mara makes. You will never see a Max Mara collection that’s in conversation with what’s happening at Gucci, Prada, or other luxury brands that inspire biannual changes in sleeves, hem lengths, and color palettes. You won’t spot the Max Mara logo anywhere but the tag of a garment. The brand does not build a world and invite you to participate in its fantasies; it sees the world that its woman—well-off, well-heeled, and well-positioned—lives in and designs for her reality.

Max Mara’s clothes imbue their wearer with a feeling of security, of confidence in her own power, a magic trick most directly associated with those aforementioned coats. Long a fashion-

insider status symbol, the wool and cashmere ones, in resolutely simple wrap shapes or sumptuous double-breasted cuts, are often compared to the Hermès Kelly bag or the Burberry trench coat because of how they serve as an emblem for the brand. Still, like the rest of Max Mara’s clothes, they are discreet, a kind of anonymous armor.

Max Mara has long been considered appropriate clothing for occasions that demand a bit of gravitas—like Jolie’s United Nations visits, or Markle’s royal appearances, or Pelosi’s showdown with Trump. But increasingly, its steadfast commitment to understatement, to putting the woman before the clothes, feels like something singular, even radical. In a fashion world dominated by sputtering trends and dizzying change, women find something respectful in Max Mara’s philosophy. While most brands strive to froth their customers up to buy their latest It bag or dress every six months, Max Mara has instead focused on subtle variations on classic wardrobe pieces with a commitment to quality. It isn’t necessary to buy a new coat every season because the design and the fabrication hold up; the coat will live in your closet for decades. 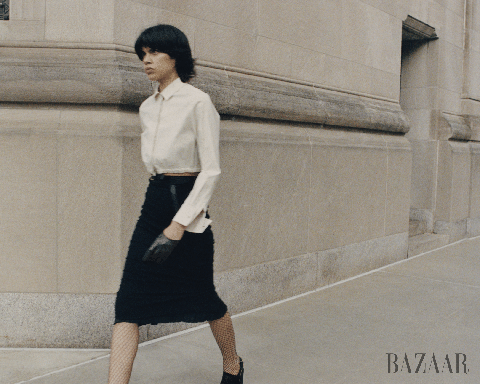 Also unchanged: Max Mara’s emphasis on the brand over its designer. The British-born Griffiths arrived at Max Mara in 1987, as a recent fashion graduate and passionate club kid, and worked his way up to the role of creative director. But it’s only in the past decade that he has even spoken on behalf of the brand. This is no Martin Margiela circus act, in which Griffiths is playing coy to cultivate mystery. He simply understands that his job is to emphasize the customer—the woman—rather than himself.

“There is a sea of ideas out there...and I always think of Max Mara as being a rock in the sea. It represents lasting value. It’s clinging to something with meaning.”

When we meet in June in a Lisbon hotel suite that’s serving as the brand’s press war room, just before the 2023 Resort show, Griffiths tells me he keeps a pinboard in his office back in Italy with images of people who perennially inspire Max Mara’s collections: Marilyn Monroe, Dorothy Parker, Grace Jones. And David Bowie. Yes, the unofficial muse of a brand known for unchanging classics is Mr. Ch-ch-ch-changes himself. “David Bowie deserves his place on that board for what he did in opening people’s minds and for being able to constantly reinvent himself but stay true to who he was,” Griffiths says.

That’s how Griffiths tries to approach designing for Max Mara; fashion requires constant newness, but there is something solid and unchanging at the core. “It’s this sense of reinvention, but there’s this true essence to every Bowie album,” he explains. Each Bowie album still sounds like Bowie. “He never changed his message, [though] he muddled and clouded and distorted it, and he pushed it.”

The three-day resort show, a suave affair, was staged within the gardens among the pools of the Calouste Gulbenkian Museum, one of Lisbon’s marquee arts institutions. Mention Lisbon, Griffiths noticed, and people would say, “Oh! I’ve always wanted to go there.” It’s become a magnet for young Europeans relocating from more expensive cities and a hub of contemporary culture and design. On a research trip, he discovered Natália Correia, a leftist writer who lit up Lisbon’s society and intelligentsia throughout the 1960s and ’70s with her salons, which drew intellectuals like Graham Greene and Eugène Ionesco. (There was also the matter that “she more than dabbled in erotic poetry,” as Griffiths puts it, which is a pursuit that got her a prison sentence.)